More authors who read in schools for Child Month 2016


I read at Holy Childhood Prep. School to the Kindergarten classes. I read Abigail’s Glorious Hair by Diane Browne and ‘Lally-May’s Farm Suss’ written by me.


Abigail’s Glorious Hair sparked a lively discussion about hair and the joys and stresses of combing it. Many of the girls were thrilled to show that they had the same hairstyle as Abigail. Some of the boys expounded on going to the barber and the fact that they did not have to comb their hair every day.

Lally-May’s episode with the rolling half and Jonkanoo had them mesmerised and a little frightened, because many of them had never heard of the myth of the rolling calf, and only a handful had ever seen Jonkanoo. Again, a lively discussion of ‘scary’ things and how brave they were when they had to face frightening things. A few of the boys demonstrated some karate moves that they would use to fight the Jonkanoo if ever faced with the Lally-May scenario.

Bio:
Melanie Schwapp was born in Kingston, Jamaica. She attended Montego Bay High School in St. James from 1st to 5th form, then was enrolled in St. Andrew High School for Girls in 1982 to sit her A’level exams.

Two short migrations at two key stages of her life, opened Melanie’s eyes to the cultural and social discriminations in society, and thus began her quest for understanding through writing. At the age of five she moved to England with her family, where she was awakened to the nature of colour prejudice, and then during her late teens and early twenties, she attended the University of South Carolina, where the subtle traits of discrimination cemented her interest in the social repercussions of these prejudices.
Although Melanie has written recreationally all her life, her first published work was a children’s book, Lally-May’s Farm Suss in 2005 in which she revives a Jamaican myth and several cultural aspects through the eyes of a child. Her second publication was the novel Dew Angels in 2011 where she explores the hidden aspect of prejudice and other social handicaps in Jamaican society. Having fallen in love with the rural lifestyle while growing up on her
grandparents’ farm in Montego Bay, Melanie also does small garden landscaping and interior decorating. She is a devoted mother to her three children and a sometimes devoted wife to her husband. She resides in Kingston. 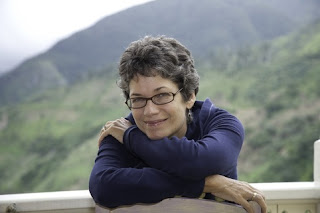 Diana won the Hollick Arvon Prize for Caribbean writing in 2014, for her non fiction work-in-progress Loving Jamaica: a memoir of place and (not) belonging.
Diana founded the Jamaica Environment Trust (JET) in 1991 and still serves as its CEO and guiding force.   She was a popular newspaper columnist for The Gleaner (1994-2001) and her short fiction has been published by the journal Eleven Eleven, Granta On Line, Fleeting Magazine, The Caribbean Writer, Afro-Beat, Lifestyle Magazine and the Jamaica Observer’s literary supplement, Bookends.  She was the regional winner of the Commonwealth Short Story Prize in 2012, for her short story The Dolphin Catchers.
Diana was born into the Jamaican upper-middle class and has spent a lifetime pondering questions of race, class, colour, and privilege in Jamaican society.  The honest and penetrating insights in her novels and stories come from sharp observation and profound self-reflection.  Hers is a uniquely authentic voice from a background which usually turns away from all that she unflinchingly faces.